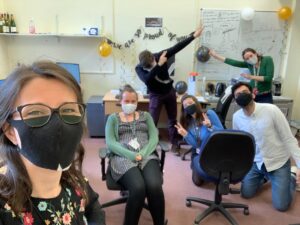 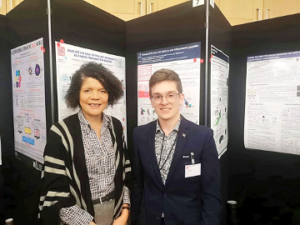 Many congratulations to Dr Benoit Darlot on successfully defending his DPhil thesis on Design of modulatory peptides against chemokines.

Benoit was an EPSRC Synthesis for Biology and Medicine CDT student, Oxford and was co-supervised by co-supervised by Prof Shoumo Bhattacharya (Radcliffe Department of Medicine, Oxford).  He was awarded an EPSRC Doctoral Prize and continued as a postdoc in the lab for six months.

As well as his sterling work on tick protein derived anti-inflammatory peptides, Benoit was an active member of the research community.  He was a member of the NU Rainbow Network steering committee and the committee for the NuTEC RSC local section where he  endeavoured to support his local community and encourage young chemist to get their voices heard.

It was great having Benoit as part of the team and we wish him every success as he embarks on his journey to train as a patent lawyer in London.